Rowing legend and honorary SABC member Dame Katherine Grainger has formally opened our new boathouse. The £1 million development, which has been a decade in the making, will allow us to truly live up to our slogan, “Rowing for all”, and offer opportunities to many more athletes of all ages in the coming years.

The boathouse sits adjacent to the club’s current home at Meggetland on the Union Canal, and hosts space for dozens of boats, as well as changing facilities and a land training and social space. The landmark build was financed through fundraising initiatives by club members, as well as investment from sportscotland and donations from charitable trusts.

Six-time rowing world champion Dame Katherine Grainger cut the ribbon to the new boathouse in front of dozens of members, friends and supporters of the club, and then helped our captain Lindsay Flockhart carry the boat named after her from the old boathouse into its new home. 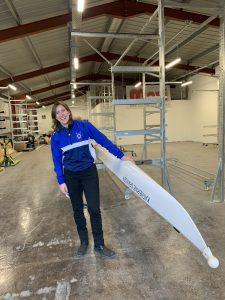 At the opening ceremony, president Sarah Whitley thanked all those who supported the build, including our architects and contractors, and awarded an honorary membership to developer and former SABC rower Will Hean for his contribution to the project. She told the audience of the long journey that lead to the opening, and set out the opportunities the new boathouse will provide.

The president said: “After over a decade of planning, this is a great moment in the club’s proud 175-year history. The new facilities will be a game changer for us and allow us to offer many more opportunities for people to experience rowing on the Union Canal. Our ambition is to build the best club in Scotland, in terms of supporting top-class performance but also giving people from all backgrounds the chance to try out rowing. The new boathouse will help us do that.”

Dame Katherine said she was “quite jealous” of the club’s amazing new facilities, and said it made her feel like she “wanted to do it all over again”. The new boathouse would give members a space to gather, as well as train, the Olympic legend said.